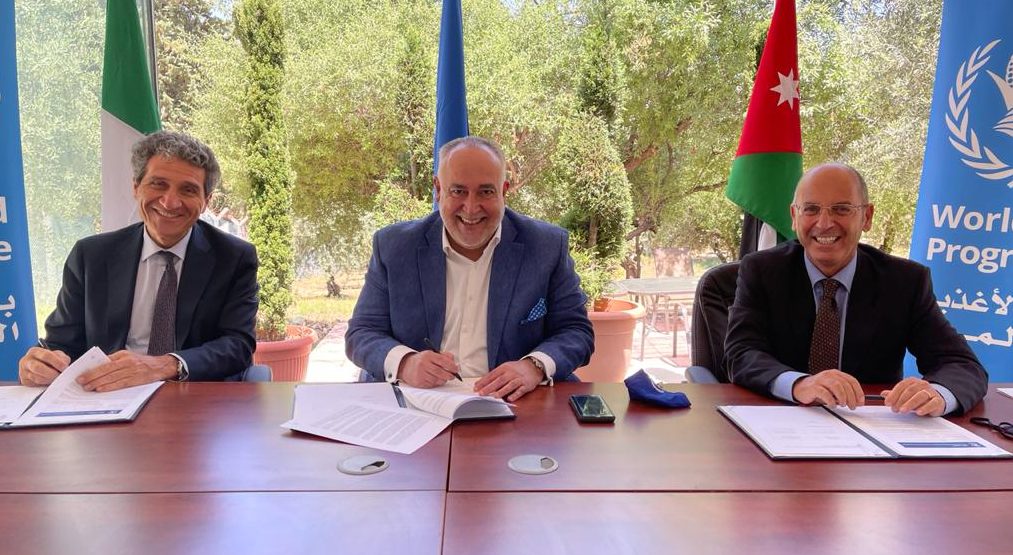 WFP’s school feeding project targets a total of 420,000 Jordanian and refugee school children in communities and in Syrian refugee camps every year. This contribution from the Government of Italy through the AICS, will support 16,000 students in 325 schools across Jordan. It will also provide job opportunities to vulnerable Jordanians and Syrians, especially women and people with disabilities, working in the healthy kitchens preparing the fresh snacks for distribution to the school children.

The project will be implemented in Mafraq, Ajloun, Irbid, Karak, Balqa, Zarqa and Madaba, and in the Za’atari and Azraq refugee camps during the upcoming 2021/2022 school semester when the measures against the pandemic ease and children return to schools.

Access to food remains a challenge for Syrian refugees, particularly as families have little opportunity for work due to the pandemic, and are now struggling to pay their food, rent and healthcare. The lack of household income has also forced vulnerable refugees to send their children to work instead of keeping them in education.

“This assistance has various and positive impacts on the population: it reduces the drop outs from school and helps increase the enrollment rate of students”, said AICS Amman Director Michele Morana. “In addition to improving the health of children by improving nutrition quality, the contribution supports Jordanian and Syrian families whose economic vulnerabilities have been exacerbated by the outbreak of COVID-19 that has reduced access to food for all population groups. It also helps increase social cohesion between refugees and host communities”.

“This agreement”, Ambassador Cassese said, “follows the two contributions that Italy has previously granted to WFP to sustain food insecure households and help bolster sustainable national school feeding programmes. The renewed partnership complements the efforts of Italy supporting the Jordanian Government’s strategy to improve education and food security, in line with the Jordan response plan to the Syrian crisis and with the national priorities that include optimizing social protection systems, tackling unemployment and increasing women’s participation in the labour market”.

“WFP values the partnership with the Italian Government and welcomes this generous contribution in support of the National School Feeding Programme in Jordan. Children concentrate better when they are not hungry; many teachers have told us the classes are more productive and focused when children receive these snacks. We look forward to children’s healthy and safe return to school next semester,” said Alberto Correia Mendes, WFP’s Representative and Country Director in Jordan.