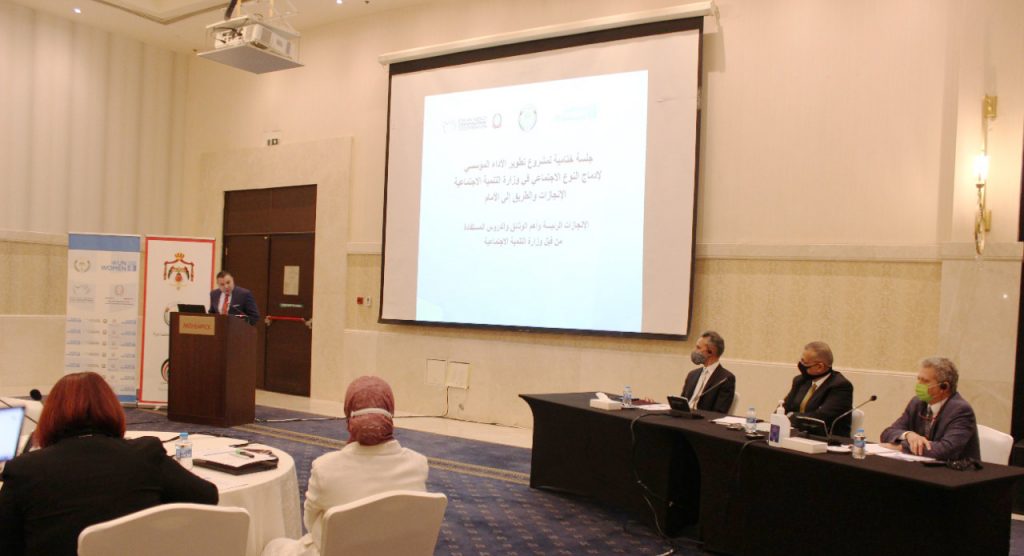 Amman, 8 September 2021 – In occasion of the closing ceremony of the project “Institutional Capacity Development for Gender Mainstreaming at MoSD” funded by the Government of Italy through the Italian Agency for Development Cooperation (AICS) and implemented in partnership with the Ministry of Social Development (MoSD) and UN Women, the MoSD Secretary General H.E. Dr. Barq Al-Dmour, on behalf of the Minister of Social Development (MoSD) H.E. Ayman Al Mufleh, affirmed that Jordan achieved significant progress in promoting gender equality and women’s empowerment, in alignment with both its national and international commitments, by adopting key policies, strategies and legislation.

Al-Dmour referred to the Government’s leadership on this agenda through the action of the Inter-ministerial Committee for Women’s Empowerment (IMC) as well as last year’s adoption of the National Strategy for Women (2020-2025).  This is considered a guiding framework to  inform the formulation of policies that can accelerate women’s empowerment at the economic, social and political level in alignment with broader national priorities.

Additionally, the Government of Jordan, through the IMC, launched a Gender Mainstreaming Policy for the public sector with the support of UN Women.

The Head of AICS Amman Mr. Emilio Cabasino added that “on behalf of the Italian Agency for Development Cooperation, we are very glad to celebrate the achievements of such an important initiative and we look forward to discussing the project’s sustainability and its long-term impact, towards the full realization of gender equality and women’s empowerment in Jordan”.

Al-Dmour further explained that promoting gender mainstreaming in institutional performance is an important step towards closing the gender gap as it provides institutions with practical tools and a clear roadmap to ensure equal opportunities in all processes, as well as the development of gender-responsive services in order to achieve gender equality and justice. In particular, it enables institutions to leverage opportunities by transforming gaps into areas of improvement across all sectors.

He also highlighted the Ministry’s efforts in promoting legislation and policies that contribute to achieve justice and provide equal opportunities between men and women. Such approach responds to Jordan’s international commitments to reduce inequalities and discrimination among people living in Jordan on the basis of gender.

Among the project’s accomplishments at the institutional level are: the training manual prepared for the MoS; the practice note on how to formulate performance indicators for gender mainstreaming – which provides a clear methodology for designing gender-responsive internal policies and plans internal policies; and a dedicated guide on how to rollout a gender-responsive public services assessment. As a result of the implementation of these tools, the draft MoSD’s Strategic Plan (2022-2026) has been reviewed from a gender perspective and ten performance indicators on gender equality and women’s empowerment have been added.